Last week, the MagnusMaster stabilisation system was put into operation and very successfully handed over following its installation by Port Yacht Technic in Marmaris under the meticulous and close supervision of DMS Holland and Vripack. Mare-N is a private yacht which belongs to the very well-known and former founder of Vripack, Dick Boon. Today, at the age of eighty, he is still indirectly involved with his brainchild based in Sneek. When Dick Boon decided that he wanted to install stabilisers on Mare-N, he asked his naval architects for advice. It was quickly agreed that MagnusMaster was the most suitable system for his luxury motor vessel. “Once the decision had been made, everything went very smoothly: from the moment I applied for a quotation right through to when the DMS Holland team put the system into operation in Marmaris and we went on a sea trial. Often, with similar products and on projects such as this one based abroad, you see the distributors or dealers taking the lead. That did not happen here at all. Port Yacht Technic naturally carried out a lot of work, but it was very clear to see that DMS Holland kept matters and control in their own hands, not only remotely from the Netherlands but also on location. If you ask me, this is also the only way to really further roll out such a high-quality product worldwide”, explains owner Dick Boon who is still regarded in Turkey as one of the most famous yacht designers in the world. In fact, he was recently interviewed by the well-known Turkish magazine Naviga. Every year Dick Boon and his wife Gundula stay on board of the Mare-N from April to October with the pleasure of sailing the Aegean Sea and around the many Turkish and Greek islands. Despite the fact that are not in any great hurry, they also no longer risk being stuck in port in less than fair winds. They, and their visiting family and friends, can now all enjoy the amazing trips and on board comfort. 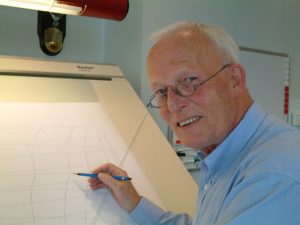