The visit followed the special mention which Mr. Henk Kamp, Minister of Economic Affairs, gave DMS Holland in an interim review of the 2010-2018 national Valorization.

During his visit, Mr. Pauli received a detailed insight in to the company’s stabilization systems AntiRoll and MagnusMaster. Patrick Noor (Director of Marketing) showed him, amongst other items, a film featuring the unique kicking effects of the recently deceased Johan Cruijff, the unparalleled number 14, to clearly explain and demonstrate the physical principle of the Magnus effect.

In his response, Mr. Pauli underlined in particular the importance of the innovative strength of companies such as DMS Holland in relation to the economic growth of Brabant. Furthermore, the fact that nature itself had been an inspiration, in this case with the whale, captured his imagination, “in the future, especially when it comes to the Brabant economy, it will all be about innovation on the one hand and sustainability on the other. That also requires a considerable amount of creativity. Despite its rather young existence, DMS Holland has shown itself to posses a great many qualities across all of these faculties – innovation, sustainability and creativity. As the province of Brabant, we are also of course proud, and rightly so, that DMS Holland as a Brabant company, has already been awarded a number of prizes. Plus we are of course also pleased that DMS Holland has been cited as an example of successful start-up company, one which is supported by the Valorization Program.”

After lunch – having consumed recently officially declared National Intangible Cultural Heritages, more commonly known as Brabant sausage rolls – which, incidentally, received the expert approval of Mr. Pauli, a butcher’s son – the contingent moved on to the Black Pearl. A fast yacht which this time was not in the Caribbean under the command of Captain Jack Sparrow but in fact moored at DMS Holland’s neighbors Moonen Yachts and under the supervision of Arnold van Aken for the installation of DMS Holland’s MagnusMaster stabilization system.

As they stepped on board, Mr. Pauli explained that he had discovered the importance of stabilization systems early on in his youth when he, having had a few beers, missed the gangway because of the rolling of the ship and ended up in the water. This time, the deputy was spared a dripping wet suit.

The Black Pearl is an example of Brabant maritime cooperation. Designed and built by Van Der Heijden Steel Yachts from Waalwijk. Now equipped with the MagnusMaster stabilization system, thanks to Moonen Shipyard in cooperation with DMS Holland, companies both located in Den Bosch.

Mr. Pauli also called DMS Holland, rather aptly, ’a gem’ due to the fact that the company deliberately seeks cooperation with other Brabant companies within its business sector and actually puts this cooperation in to practice.

In addition, Mr. Pauli went on to praise DMS Holland’s valorization ability:
“And what really is appealing to us as the province of Brabant, is that companies such as DMS Holland not only develop ideas but also actually convert them into products – therefore demonstrating the valorization ability. Companies like this are essential for stable growth of Brabant and can therefore count on the support of the province.” 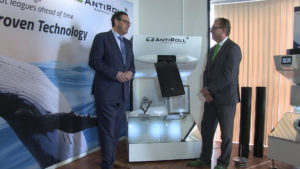 Deputy for the Province of Brabant Mr. Bert Pauli (l) receiving a detailed insight in to DMS Holland’s stabilization systems from Patrick Noor (Director of Marketing) as he visits the company’s showroom. 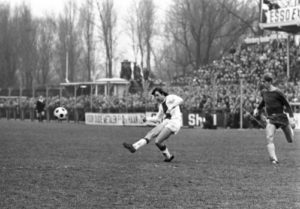 Patrick Noor (Director of Marketing) showing Mr. Pauli a film featuring one of the uniquely effective kicks of the recently deceased Johan Cruijff, the unparalleled number 14, to clearly explain and demonstrate the physical principle of the Magnus effect. 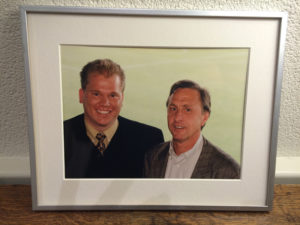 Patrick Noor and Johan Cruijff together at the FC Den Bosch stadium. 20 years on and DMS Holland is now also located in Den Bosch and also using the master’s Magnus effect for their stabilizer. The MagnusMaster.