The famous naval architect Dick Boon has recently ordered a MagnusMaster stabilisation system for his yacht Mare-N, named after his granddaughter. The system will be installed by DMS Holland in cooperation with Turkish specialists and commissioned in Marmaris.

“We consider it a huge compliment that Dick Boon has opted for MagnusMaster. It is, for us, confirmation that MagnusMaster meets the highest of demands in the yachting industry.” Explains Patrick Noor, Owner/Sales & Marketing Director of DMS Holland.

Dick Boon, born in 1938, turns 80 next year and is still a keen water sports enthusiast. He sails a lot on Turkish and Greek waters with his yacht Mare-N, a classic 19.30 metre yacht recognisable by its yellow funnel and its two masts.

Dick Boon, an out-and-out water going man, had already started drawing boats as a toddler, he taught himself to sail and in 1961, at the age of 23, he began designing boats under the name of Vripack. He is famous for the many yachts he has designed, each of which bear his famous “signature”. The seaworthy Doggersbank, of which more than 500 have been built, is perhaps his best-known design.

Today, more than 56 years and 7300 projects later, Vripack remains a leading architectural agency, one not only focussed on beautiful designs but also technical elaboration and engineering excellence. Many shipyards, yacht and commercial, use Vripack’s expertise as naval architects as well as their skills in technical engineering for their vessels. 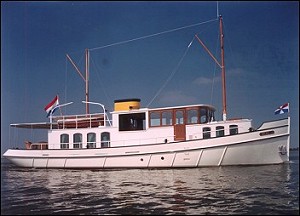 More news will follow soon about the installation of the MagnusMaster system on board of Mare-N.