Now that the MagnusMaster has successfully found its footing in the market and that business at DMS Holland is going well, the decision has been made to start with the development of the new patented AntiRoll 3-in-1 system. This development is being carried out in cooperation with Brabant Engineering and is also supported by RVO (Rijksdienst Voor Ondernemend Nederland – Netherlands Enterprise Agency), who, in December 2017, provided the so-called MIT subsidy. This new AntiRoll system will be predominantly developed for high-speed yachts up to 30 metres, of which thousands are produced worldwide every year.
Currently, there are sometimes up to three systems delivered on such ships because the individual stabilisation systems simply cannot deliver the best performance for every type of condition on their own. The new AntiRoll 3-in-1 system is capable of doing this meaning it is able to deliver the best performance at not only Zero Speed but also at Trawler and at High Speed. During METS 2018, which takes place in November in Amsterdam, this 3-in-1 system will be on general display to the industry for the first time. Delivery of the first orders are planned for 2019. In the mean time, several international shipyards have already expressed their interest in testing the system on one of their models. Several so-called “launching customers” have also already come forward to help with this amazing innovation. 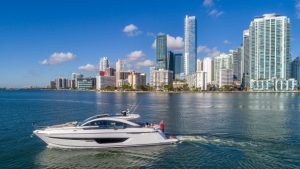