During the course of the upcoming weeks, the Vryburg PB-61 will be equipped with a RotorSwing system with extended rotors, the RotorSwing 140/1250. This roundbilge cutter Vryburg PB-61, designed by Pieter Beeldsnijder, is the successor to the Vryburg PB-58 delivered in 2011. The owner of the vessel has opted for RotorSwing because rotors are less vulnerable than fins on smaller inland water ways. The cruising area for this sturdy and seaworthy yacht is vast and runs from France to northern Scandinavia. Planned for 2015, is Norway with the Arctic Circle passage, ultimately ending in the Lofoten islands. The name Vryburg originates from the Dutch East India Company (VOC) period. It is the name of one of the historic country estates in Zeeland, home to the wealthy who invested their money in VOC ships. The ships were often named after the estate of the investor. As a result, at the end of the late 17th century (1695) and mid-18th century (1748), two ships built for the Kamer van Zeeland at the VOC shipyard in Middelburg, were launched under the name “Vryburg”. Both ships, which were VOC types known as Transom Return Ships (Spiegelretourschips in Dutch), were extremely successful and made many voyages without incurring damage. The name Vryburg stands for trust!
More information about the Vryburg PB-61 and the Vryburg PB-58 can be found at: www.vryburg.nl 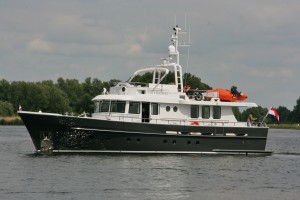 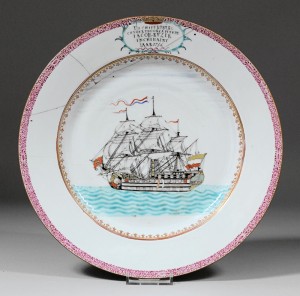 Chinese porcelain plate illustrated with the second of the two Transom Return Ships (Spiegelretourschip) named Vryburg. These commemorative plates were souvenirs of the ship’s voyage to Canton in 1756.