DMS Holland has recently won a major order for an AntiRoll roll damping system for the 50m Feadship ‘Endless Summer’ (formerly Carmac VII). The yacht, which was built in 1991 by Royal van Lent, is undergoing a major refit in Florida. Part of the refit works, alongside extending the swim platform serving a sportfishing boat and installing a jacuzzi, is the replacement of the current Vosper stabilization system for an AntiRoll system. The retrofit will be supervised and managed from the Netherlands by De Voogt Naval Architects and Feadship. The owner, a very technically savvy gentleman, was looking for a stabilization system that provides uncompromised performance and operation both cruising and at anchor. After studying the various stabilization tests from a number of different systems which the vessel has been equipped with in the past, he was instantly convinced by the performance of AntiRoll. The yacht, which he intends to use as a mothership to his sportfishing boat, will also serve as a floating hotel for his family. The yacht will be delivered in the summer of 2015. 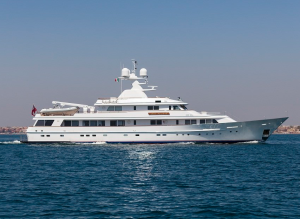